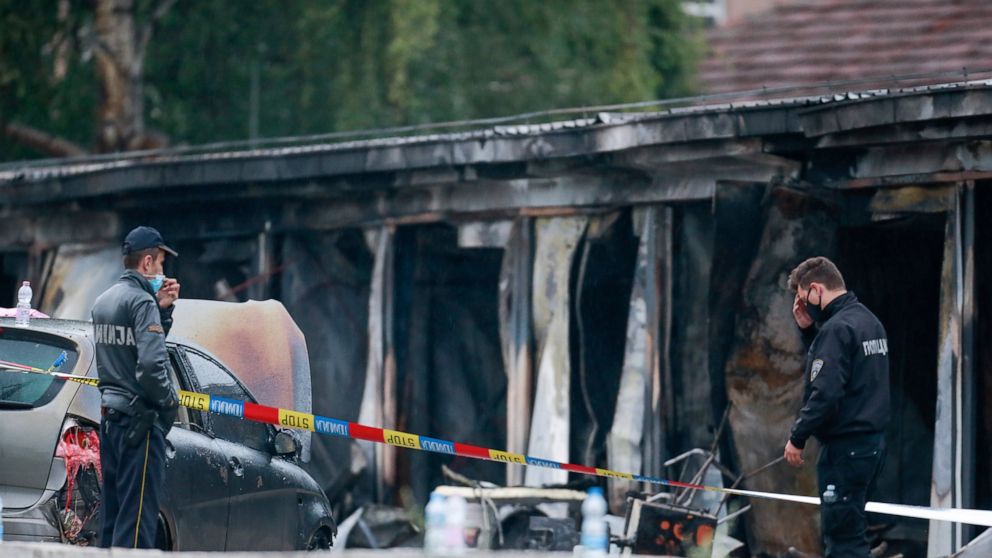 SKOPJE, North Macedonia – The government of North Macedonia declared three days of mourning on Thursday following a deadly fire overnight at a COVID-19 field hospital that left 14 people dead and a dozen injured .

The fire broke out on Wednesday evening in the western town of Tetovo, where the unit had been set up following a recent spike in infections in the area that left local hospitals full.

Health Minister Venko Filipce said it was not yet clear whether the 14 dead were COVID-19 patients or whether some visiting family members may have been among them.

“We will perform DNA tests on the victims which will confirm if there were any family members,” Filipce said.

“It is difficult to express in words the pain I feel for the lives lost and the loss of their families,” he said at a press conference Thursday evening.

Twelve other people were injured and were transferred to the main hospital in Tetovo, where they were in stable condition, the minister said.

Responding to public pressure to resign in the wake of the blaze, Felipce said he would decide whether to do so once the investigation into the incident is complete.

The minister insisted that the 19 field hospitals set up across the country over the past year to deal with the pandemic have been built to specifications and standards set by the World Bank, which has financed their construction with a loan.

“It’s a tragedy I can’t even explain,” said Idriz Brahimi, a resident of the neighborhood. “They were sick people who couldn’t get out. It’s a huge disaster. “

After an emergency meeting on the fire, the government ordered that national flags be half-masted for three days and that all sporting and cultural events and celebrations be canceled until Saturday.

The cause of the fire, which passed through the wood panel structure, was not immediately determined, although it was an accident potentially related to the oxygen supply to the aircraft. installation.

President Stevo Pendarovski said during a visit to Tetovo that the investigation would be completed within five days and that the cause “was not arson”.

Five prosecutors from Tetovo and Skopje are working on the investigation. Prime Minister Zoran Zaev said in a Facebook post overnight that the blaze followed an explosion at the site. There was speculation that the explosion was related to the supply of oxygen.

“We saw the explosion and when we got here everything was on fire,” said Nexhmedin Haliti, a resident of the neighborhood. “The firefighters came and started to put out the fire, it lasted 15 to 20 minutes. Everything burned down.

Fires in COVID-19 hospitals or departments have claimed dozens of lives in other countries.

In July, a fire that swept through a COVID-19 ward at a hospital in Nasiriyah, Iraq, killed 92 people and was reportedly triggered by either a short circuit or the explosion of an oxygen cylinder. In April, at least 82 people – many of whom were COVID-19 patients or their relatives – died in a fire at a Baghdad hospital that erupted when an oxygen tank exploded. The Iraqi Minister of Health has resigned following the disaster.

In Romania, two deadly hospital fires over a three-month period have raised concerns about the country’s aging and overburdened healthcare system.

Last November, 10 people died in a fire in an intensive care unit for COVID-19 patients in the town of Piatra Neamt, in northern Romania. Then, in January, another fire engulfed a ward of the Matei Bals hospital in Bucharest, killing five people. Supplementary oxygen was present in both departments of the hospital.

In the aftermath of the Matei Bals fire, the hospital lawyer said that if a nurse had not cut off the oxygen supply, “we would have had an explosion”.

The North Macedonian government said Thursday it was accepting the offer of NATO allies to send fire experts to help with the investigation. It was not clear which countries would be involved.

With less than 30% of the country’s estimated 2 million people fully vaccinated, North Macedonia has seen a significant increase in coronavirus infections and deaths since late August.